How do I obtain and analyze data from The Cancer Genome Atlas (TCGA)? Which TCGA datasets have specific mutations in my gene of interest?

This recipe provides a method for identifying and obtaining specific datasets of interest from The Cancer Genome Atlas (TCGA), through a web-based tool called FireBrowse. An example use of this recipe is a case where an investigator may have a gene they are interested in, such as ERCC2, and would like to know if there are mutations in this gene in specific datasets of interest, such as bladder cancer. 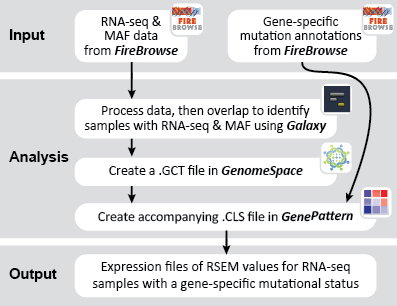 An in-depth study of urothelial carcinoma, which causes ~150,000 deaths annually, by Kim et al. (Nature Genetics, 2016) has identified a mutational signature in bladder cancer involving the nucleotide-excision repair (NER) pathway. Kim et al. identified a mutational signature involving ERCC2, a gene encoding a DNA helicase which plays a critical role in the NER pathway. Somatic mutations in this gene may prevent proper functioning of the NER pathway, allowing mutations to accumulate. Uniquely, urothelial cancer is the only known tumor type to date in which ERCC2 is significantly mutated.

Kim et al. used the collection of bladder carcinoma (BLCA) samples in The Cancer Genome Atlas (TCGA) to complete their analysis. Data were downloaded from the Broad Institute TCGA Genome Data Analysis Center, and samples were categorized based on mutational status. Tumors with somatic, missense mutations in ERCC2 were compared to non-mutated (wild-type) samples to identify the comprehensive mutational landscape of bladder cancer (also described in this TCGA paper).

The Cancer Genome Atlas labels its datasets with the TCGA barcode, an identifer that describes the metadata associated with sample. You can learn more about the TCGA Barcodes on the NIH National Cancer Institute Wiki page (see also: working with TCGA data).