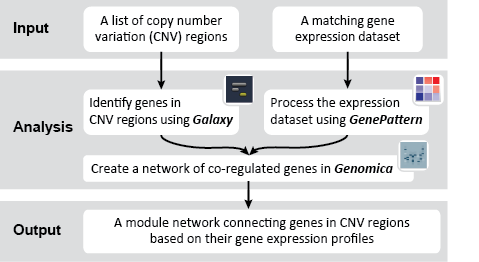 To complete this recipe, we will need a file describing the locations of CNV regions in a specific condition. In this example, we use CNV regions identified in DLBCL cancer cell lines using the GISTIC algorithm, which identifies regions of a genome that are significantly amplified or deleted across a set of samples. For this particular recipe, the GISTIC file will need to have the .BED extension. In addition, we will need the accompanying gene expression dataset to evaluate the expression of these aberrant genes. We will need the following datasets, which can be downloaded from the following GenomeSpace Public folders:

Public  >   RecipeData  >   ExpressionData  >  mrna_orig.gct: This is a GCT file of the microarray data which accompanies the DLBCL SNP array data.

Alternative: other methods to load data into Galaxy.

1. Click on the file (e.g., GISTIC_regions.bed) in GenomeSpace, then use the Galaxy context menu and click Launch on File.

2.Click on the file (e.g., GISTIC_regions.bed) in GenomeSpace, then drag it to the Galaxy icon to launch.

We will use the UCSC Main tool to obtain a reference genome from the UCSC Table Browser, through Galaxy.

We will use the Join, Subtract and Group tool to remove duplicate entries from our dataset. The goal is to extract only the unique Entrez ID gene annotations for the genes in the CNV region.

We will use the Send Data tool to send our newly created TXT file back to GenomeSpace, so that we can later use the reference gene annotations in a different program.

Click on the file (e.g., mrna_orig.gct) in GenomeSpace, then use the GenePattern context menu and click Launch on File.

Click on the file (e.g., mrna_orig.gct) in GenomeSpace, then drag it to the GenePattern icon to launch.

We will use the PreprocessDataset module to filter the expression dataset and normalize the data. This module uses the GCT file, mrna_orig.gct.

9: Saving the files to GenomeSpace

Save the mrna_orig.preprocessed.gct file to GenomeSpace using one of the following methods.

Alternative: other ways to save files to GenomeSpace

We will use Genomica to create and visualize a "module network" of co-regulated genes. This will illustrate similarities in expression of the genes associated with aberrant regions in cancer cells.

NOTE: Genomica requires a Java security exception. In order to open the Genomica JNLP, add https://genie.weizmann.ac.il to your Java exception site list. For more information on how to do so, go HERE

To create a module expression network in Genomica, we use the Create Module Network algorithm. A module network is a model which identifies regulatory modules from gene expression data, especially modules of co-regulated genes and their regulators. The module also identifies the conditions under which the regulation can occur.

NOTE: Depending on how many modules you are interested in findings, you can change the Max number of modules parameter to a different number. In this example, we limit our regulator gene set to the 95 genes extracted using Galaxy. We then look for a maximum of 50 modules whose gene expression can be categorized by the expression of these candidate regulator genes. To save time, we only run 5 iterations to identify modules.

When the algorithm completes running, you can view the different modules that it produces. There are different ways to view the data; we can use these visualizations to browse through the data and identify modules of differentially expressed genes. 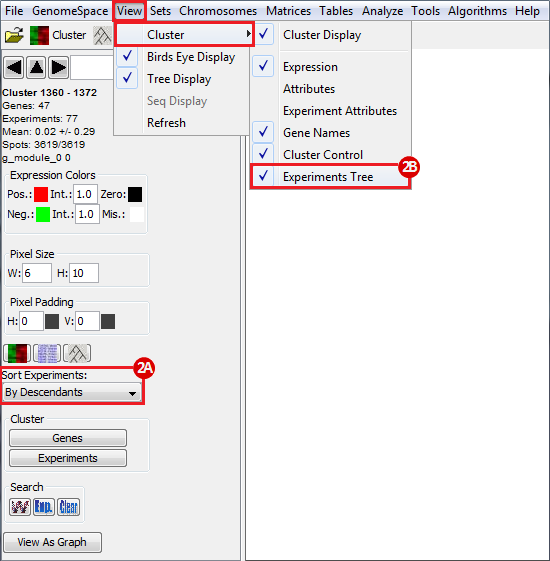 This is an example interpretation of the results from this recipe. 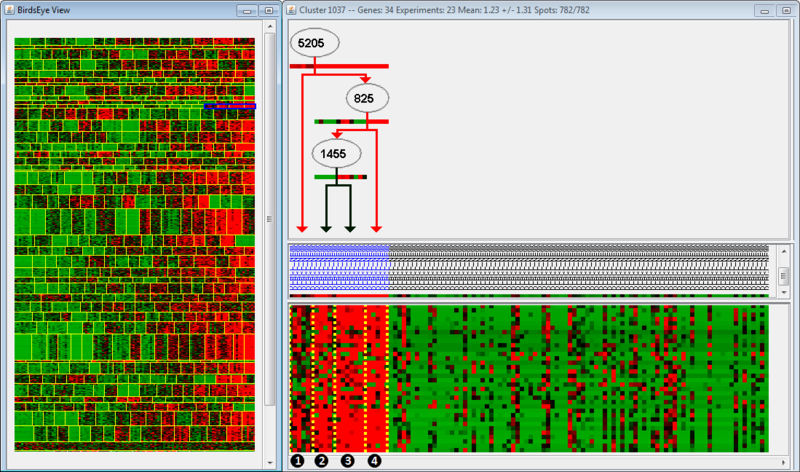 In the left panel is the BirdsEye view, which displays all the modules found by the algorithm. Each module is separated by horizontal yellow lines, and the splits within a module are separated by vertical yellow lines. Splits indicate that regulation of an up-stream gene changes from one group of arrays to the next. In this example, the module we are examining is highlighted in blue; note that only one part of the module is highlighted (we are examining only a few splits within the module). The right panel is the Cluster view of the microarray, organized according to the BirdsEye view. For example, the clusters we are examining (highlighted in blue) have been moved to the left side of the Cluster view, even though they are the rightmost clusters in the BirdsEye view. The top part of the second panel indicates the gene regulation program; the middle indicates the arrays grouped according to expression, and the bottom indicates the actual expression itself (as a microarray).

However, the results in this example are just one interpretation and are only a simple representation of possible results.

Hi everyone I have some trouble in “10: Loading files into Genomica “. When I launched Genomica and wanted to “Open From GenomeSpace” new window does not appear to choose "mrna_orig.preprocessed.gct" file form it. Can anyone help me please?

Hi AlexTall, thank you for contacting us! I just gave this a try and was not able to replicate the issue. For me there is a small pop-up window that gives me access to my GenomeSpace files. Please email us at gs-help[at]broadinstitute.org, so that we can open a ticket and help troubleshoot this issue.