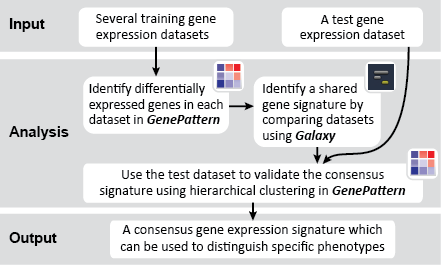 To complete this recipe, we will need several gene expression datasets:

We will use the ComparativeMarkerSelection module to identify genes which are differentially expressed and can distinguish between two phenotypes (e.g. normal vs. JQ1-treated), separately for the acute myeloid leukemia (AML) and multiple myeloma (MM) datasets. This module uses the GCT file and the CLS file.

We will load the two sets of differentially expressed genes from the AML and MM datasets into Galaxy. Then, we will use a pre-built GenomeSpace workflow to process the datasets, filtering and removing features that do not pass certain cutoffs. Finally, we will create a consensus signature and send a list of gene symbols back to GenomeSpace for additional analysis.

3: Identifying a consensus gene signature by comparing the AML and MM datasets

We will use a pre-built GenomeSpace workflow to identify the consensus gene signature. This pre-built GenomeSpace workflow uses several steps to determine the overlap between the AML and MM datasets. First, we filter the AML and MM datasets to the top genes using the following cutoffs: (1) >= 1.5 differential expression; and (2) FDR < 0.05 as calculated by ComparativeMarkerSelection (GenePattern).

We will use several GenePattern modules to extract the relevant information from our test dataset, which is the MYCN-amplified and MYCN-nonamplified neuroblastoma dataset. Then, we will project the consensus signature onto the neuroblastoma dataset and evaluate its ability to distinguish the two phenotypes (MYCN-amplified and MYCN-nonamplified) by clustering the resulting dataset.

We will use SelectFeaturesColumns to filter the neuroblastoma dataset to only those samples that are MYCN-amplified or MYCN-nonamplified. There is a third group of samples (called 'NILL'), in which MYCN amplification status was not determined; therefore, we filter these samples out and work only with the annotated data.

5: Projecting the consensus gene list onto the neuroblastoma dataset

We will use SelectFeaturesRows to filter the neuroblastoma dataset to only those gene symbols which are in the consensus signature.

We will use HierarchicalClustering in GenePattern to create dendrogram of the filtered neuroblastoma dataset, clustering the data by phenotype (MYCN-amplified vs. MYCN-nonamplified), to determine how well the consensus signature can distinguish between phenotypes. Then, we will use HierarchicalClusteringViewer to view the results of the clustering algorithm and to label samples by phenotype.

This is an example interpretation of the results from this recipe. First, we identified a consensus gene signature of JQ1 activity by finding genes that became differentially expressed due to JQ1 treatment in both acute myeloid leukemia (AML) and multiple myeloma (MM). Then, we projected this consensus signature on a test dataset of neuroblastoma cells which were not treated with JQ1, but were either MYCN-amplified or MYCN-nonamplified. Since MYCN amplification is associated with an increased sensitivity to BET bromodomain inhibitors, such as JQ1, we expected that a signature of JQ1 activity would be able to separate MYCN-amplified and MYCN-nonamplified phenotypes.