This recipe provides one method for creating and visualizing a module network of regulatory genes. In particular, the regulatory genes of interest are genes which regulate other genes associated with an embryonic stem cell (ESC) state. This 'stemness signature' is a feature common to ESCs, as well as induced pluripotent stem cells (iPSCs), and also in a compendium of human cancers, such as breast cancer. This recipe recapitulates research by Wong et al., in Cell Stem Cell (2008), "Module map of stem cell genes guides creation of epithelial cancer stem cells."

To complete this recipe, we will need a gene expression dataset and a list of genes which we believe to be important transcriptional regulators. In this example, we use a gene expression dataset of primary human breast cancer tumor samples, which is fully described in Chin, K. et al, Cancer Cell (2006). We also use a set of genes which are believed to be regulators of the embryonic stem cell state, called "stemness regulators". This gene set of stemness regulators can be obtained by following the recipe for completing Stepwise Linkage Analysis of Microarray Signatures (SLAMS). We will need the following datasets, which can be downloaded from GenomeSpace's Public folder:

breasttumor.preprocessed.collapsed.tab
This file contains the gene expression profile of primary human breast cancer tumor samples. The original dataset has been log-transformed, row-centered on the mean, and has had the probe IDs collapsed to HUGO Gene Symbols.
stemness_regulators.geneset.tab
This file contains a list of genes which are believed to regulate genes associated with the embryonic stem cell state.

A subnetwork of genes which regulate the transcription of embryonic stem cell-associated signature genes. This subnetwork shows the connections between regulators of this 'stemness signature'.

First, we will build a network of regulatory modules from co-regulated genes with similar expression profiles, from the breast cancer tumor sample dataset.

Next, we will import the network results from GenomeSpace into Cytoscape, and show the gene regulatory network. In this example, we use Cytoscape 2.8.

This will create a network of 13,341 nodes and 117,815 edges. This is an incredibly large, dense network. It is best to filter the network before attempting to visualize it using a different Cytoscape layout, such as a force-directed layout or a degree-sorted circular layout. In the next step, we will filter the network to a more manageable size.

3: Filter the network of nodes and edges to just the stemness regulators

In this step, we will filter the existing network of 13,341 nodes to just the nodes that are known to be regulators of the embryonic stemness signature. We will filter by the gene set described in stemness_regulators.geneset.tab.

To better visualize the network, try using a different layout to re-arrange nodes and edges. It is best to create a layout that minimizes overlap of edges, to make the network less confusing visually. This also allows you to identify unique features of the network that you may not see otherwise.

This is an example interpretation of the results from this recipe. First, we created a module network of genes that regulate the stemness signature, by projecting it onto a breast cancer tumor gene expression dataset using Genomica. We then used Cytoscape to visualize the connections between these genes, and to filter a large network down into a subnetwork of just stemness regulators. 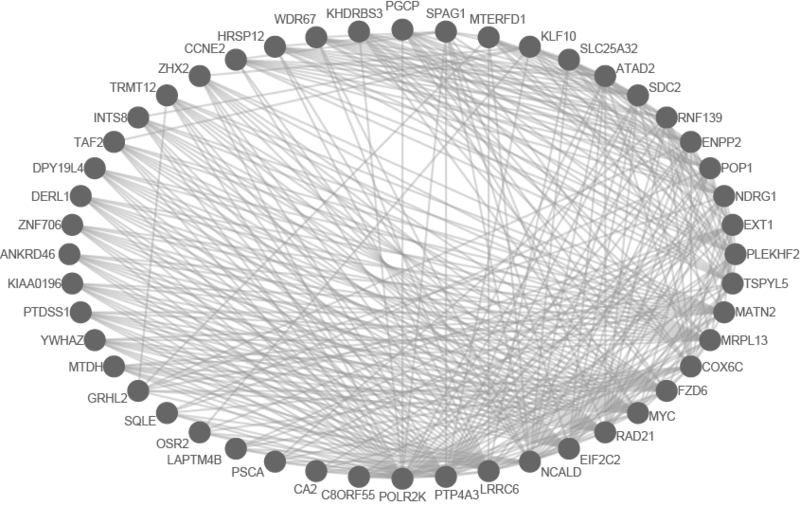