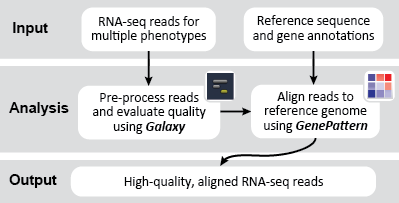 To complete this recipe, we will need raw RNA-seq reads that we will process and align to a reference genome. In this example, we will use RNA-seq data of a S. cerevisiae wild-type strain. In this recipe we will focus on pre-processing and aligning reads. We will need the following datasets, which can be downloaded from the following GenomeSpace Public folder: Public > RecipeData.

SequenceData > RNA-Seq.fastq: This is an RNA-seq file containing reads from the wild-type strain of S. cerevisiae.

SequenceData > SacCer3.fa: This is a FASTA file containing sequences for a reference genome for S. cerevisiae.

GenomicFeatureData > SacCer3.gtf: This is a GTF file which contains reference gene annotations for the S. cerevisiae genome.

Alternative: other methods to load data into Galaxy

1. Click on the file (e.g., RNA-Seq.fastq) in GenomeSpace, then use the Galaxy context menu and click Launch on File.

2. Click on the file (e.g., RNA-Seq.fastq) in GenomeSpace, then drag it to the Galaxy icon to launch.

There are various ways to interpret the FastQC report. In this recipe, we are most interested in identifying adapter sequences which we believe are contaminating our RNA-seq data.

Now, we remove the adapter sequences from the RNA-seq data by using Galaxy's Clip tool.

OPTIONAL: To observe the improved quality of the FASTQ after adapter sequences are removed, re-run FastQC on the clipped FASTQ file. Under Basic statistics, you should see that the sequence length is now variable, because some reads did not have adapter sequences and so were not clipped; other sequences contained the adapter sequence, and are therefore much shorter. You should also notes that the rest of metrics have improved in score; previously we had many bad quality scores (e.g. WARNING or FAIL), now we have more scores that pass the quality threshold (OK). If we examine the Overrepresented sequences statistic, we see that only 1.4% of our reads now contain an adapter sequence. If desired, you may again copy and clip this adapter sequence from your RNA-seq dataset.

We will use the SendData tool to send the clipped FASTQ files back to GenomeSpace, so that we can later align the reads using GenePattern.

1. Click on the file (e.g., S.cerevisiae_wt_clipped.fastq) in GenomeSpace, then use the GenePattern context menu and click Launch on File.

2. Click on the file (e.g., S.cerevisiae_wt_clipped.fastq) in GenomeSpace, then drag it to the GenePattern icon to launch.

We will use Picard.CreateSequenceDictionary in GenePattern to create a readable sequence dictionary from our reference genome FASTA file.

8: Reordering and annotating an RNA-seq dataset

We will use Picard.ReorderSAM in GenePattern to re-order the aligned reads from TopHat, so that they match the ordering of the reference genome.

We will also use Picard.AddorReplaceReadGroups to rename additional parameters of each read in the RNA-seq dataset, e.g. changing the read group IDs and library annotation information. This will make it easier to later identify duplicate reads.

We will use the Picard.MarkDuplicates module to identify and tag reads which are duplicated in the RNA-seq dataset. This module uses the processed BAM file from the Picard.AddOrReplaceReadGroups module.

The Per base sequence quality graph shows the quality of each base from the start to the end of a read. In general, areas in green are considered good scores (>30). We can see that toward the end of our reads we have some bad scores, e.g. at position 38, our reads have large error bars which potentially reflect bad scores (>20). The Per sequence GC content graph shows the distribution of GC content for our reads. The blue line indicates the predicted, normal distribution, and the red line indicates the distribution from our read. There is an obvious spike around 55-59% GC content; this spike can indicate contamination from adapter sequences. The Overrepresented sequences table shows that there is one sequence which is observed in over 8% of the reads in our dataset. In addition, FastQC checks the sequences against a list of known adapter sequences, and in this case our sequence matches an Illumina paired end PCR primer. Therefore, we know this is a definite source of error in our reads.

After removing the adapter sequences, we can run FastQC again to see that our data is much improved. The Per base sequence quality graph shows that all the bases in the read have high quality, across the read. In particular, no positions in the read have a quality score which <20 on the y-axis. The Per sequence GC content graph shows that the distribution of GC content in our dataset (red line) is now comparable to the predicted distribution (blue line). This suggests the cause of the GC spike in the original dataset is due to adapter sequences, which we have now removed. Finally, the Overrepresented sequences table shows that only 1.4% of our reads have an adapter sequence. This is a significant improvement, compared to the 8% we had previously.

These results suggest that our RNA-seq dataset was contaminated with adapter sequences and was of poor quality, compared with the dataset after adapter sequences were removed. However, the results in this example are not necessarily significant and are only a simple representation of possible results.