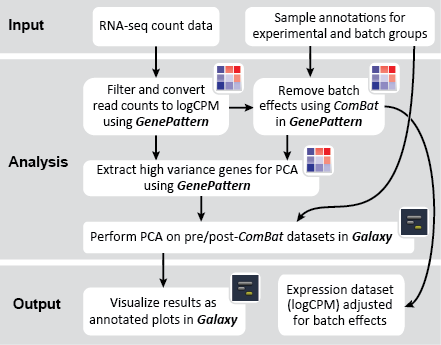 To complete this recipe, we will need a gene expression dataset of RNA-seq transcript counts describing multiple conditions or phenotypes that may be confounded due to batch effects. In this example, we will use a dataset combining gene expression measurements from two mouse (Mus musculus) behavior studies. In the first study (GEO: GSE63412), Peixoto et al. subjected animals to contextual fear conditioning (FC) and compared them to unconditioned controls. In the second study (GEO: GSE44229), Vogel-Ciernia et al. subjected animals to object location memory (OLM) training and compared them to unconditioned homecage controls. In both studies, samples destined for expression profiling were collected from hippocampal tissue. In this particular recipe, we have pre-combined the two studies into a single RNA-seq count dataset, which we will use. The known batch effect in this dataset is thus the two different labs generating the RNA-seq data.

NOTE: Since this is an example dataset for the purposes of demonstrating batch effects and their removal, we have chosen to construct a dataset that can dramatically show the effects of confounders. We therefore chose to combine two similar datasets from different labs, knowing that lab would be a strong confounding variable. When combining datasets, great care should be taken to ensure that the samples and data-generation procedures are truly comparable. This particular combination of two mouse behavioral conditioning datasets may not meet these requirements. When working with your own datasets, you may find that batch effects are not as clearly defined or that the data's underlying structure cannot be easily attributed to known confounding variables. Your confounding variables will probably be more subtle than the differing labs of our example (e.g., differing instrumentation, variable reagents, time of sample collection).

This recipe also requires a relatively detailed sample annotation file indicating each sample's name, behavioral condition, and the lab from which it was derived. We have already compiled these sample annotations as both a sample information file and a CLS class file. We will need the following datasets, which can be downloaded from the following GenomeSpace Public folder:

Public  >  RecipeData  >  ExpressionData  >  GSE63412_GSE44229.gct: This is an expression matrix containing hippocampal RNA-seq count data from mice that were subjected to a variety of behavioral training protocols. Importantly, we are interested in performing a combined analysis using data from two different laboratories; the expression matrix likely has underlying batch effects that should be removed prior to any downstream analysis. The read count data was obtained and compiled from the Gene Expression Omnibus. The file is available in GenePattern's GCT format.

Public  >  RecipeData  >  ExpressionData  >  GSE63412_GSE44229.sample.info.txt: This is a table of annotations for all the samples in the GCT file. The "Batch" column indicates the sample's originating laboratory, which we treat as our confounding "batch" variable. The "Covariate_1" column lists the actual behavioral training that each animal received (control, fear conditioning, object location memory training).

We will use GenePattern's PreprocessReadCounts module to filter out lowly expressed genes and convert the expression data from counts to log counts per million (logCPM).

2: Remove batch effects using ComBat and save output to GenomeSpace

We will use the ComBat module to run the ComBat algorithm and remove potential batch effects in our data. Specifically, our analysis contains data generated from two different laboratories and we aim to reduce the effects of this "lab" batch.

We will use the PreprocessDataset module to extract high-variance genes as determined by a delta cutoff. The delta value is simply the difference between the maximum and minimum expression values of a gene.

We will load the pre- and post-ComBat high-delta expression datasets as well as the sample info file into Galaxy.

We will use Principal Component Analysis tool in Galaxy to compute the principal components of our two expression datasets.

7: Visualize the expression datasets in the space of their first two principal components

We will use a pre-built GenomeSpace workflow to generate plots of our pre- and post-ComBat datasets in the space of their first two principal components. We will make use of the Visualize Charts options available to Galaxy files. 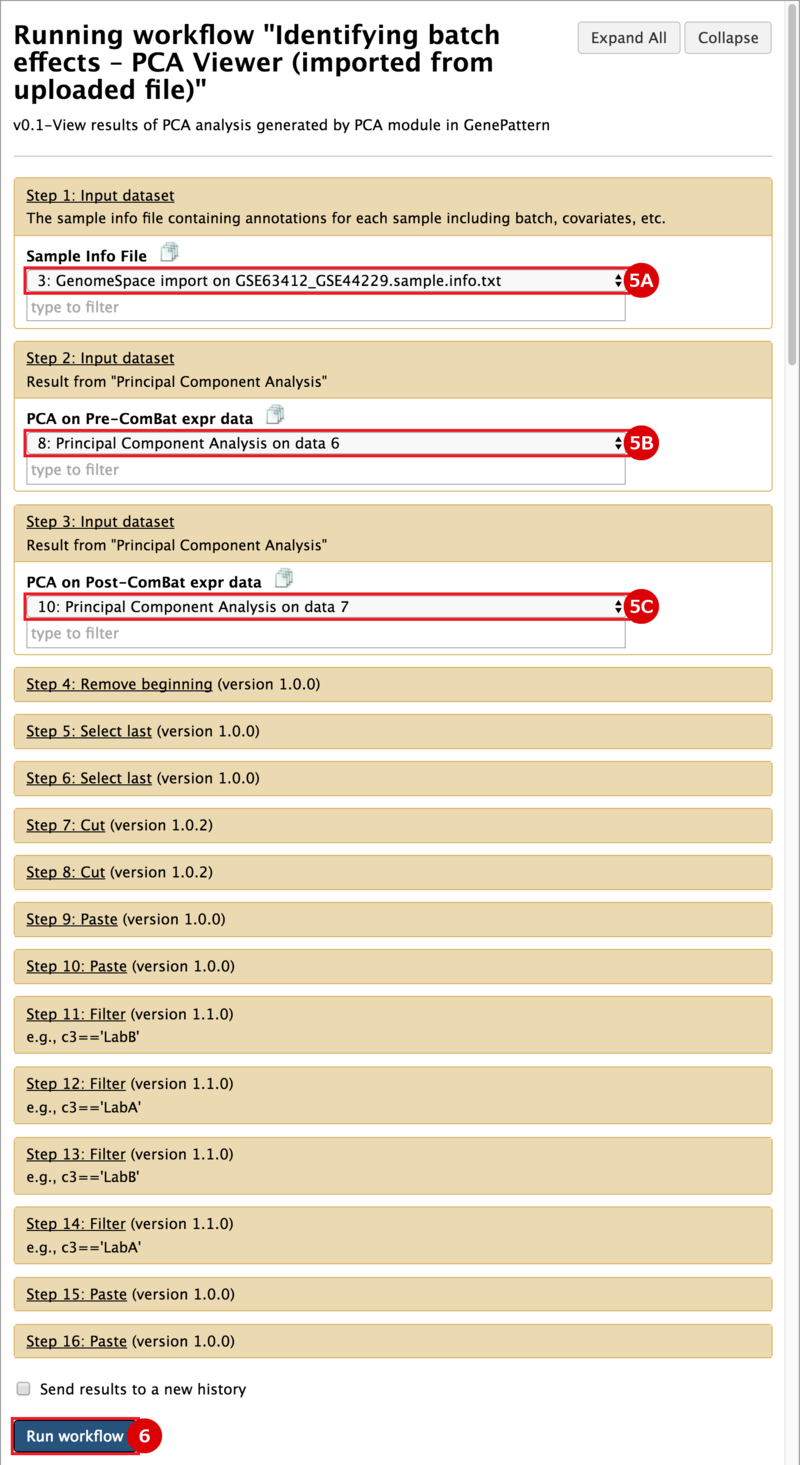 There are two primary goals of this recipe: (1) identify potential batch effects in our dataset and (2) adjust our data for any identified batch effects. This recipe generates a number of plots to help us evaluate our data along these aims:

We began by using Principal Component Analysis (PCA) to view the underlying structure of our raw expression data prior to applying ComBat. To do this, we projected our data in the space of the first two principal components, PC1 and PC2, with each point representing a different sample from the experiment (Fig. 1). The PCs identified by PCA transformation are ordered such that the first principal component, PC1, captures the largest possible variance in the dataset, and each following PC captures the highest variance possible while being orthogonal to the previous PCs. If we view our pre-ComBat data, we clearly see that the samples cluster according to the lab (Lab A or Lab B) that they came from. Since these clusters are located at disparate ends of PC1, it appears that the originating lab introduces much (if not most) of the variance in our dataset. We conclude that the lab in which the samples were processed is a batch effect.

To adjust our dataset for the identified batch covariate, Lab, we used ComBat. ComBat requires that we specify this batch covariate as well as covariates of interest; in this case, we were interested in a single covariate, treatment (control, fear conditioning, object location memory). The parametric ComBat method that we used computes a prior probability distribution for the adjustment. To evaluate this prior distribution, we view the prior plots that the ComBat algorithm outputs (Fig. 2). In this case, the parametric estimate (red) overlaps the "true" distribution (black, kernel density estimate) pretty well, so we can feel reasonably confident in our ComBat adjustment. In the case of poor estimates, we would resort to the non-parametric setting for the algorithm. For more information, see GenePattern's documentation on ComBat.

After applying ComBat to our expression dataset, we again apply PCA and project the transformed data into the space of the first two PCs (Fig. 3). Post-ComBat, we see that the samples from our two lab groups are more overlapping, indicating that the batch effect has been mitigated.

At this point, the investigator can proceed in number of directions. The post-ComBat PCA projection can be explored to see how our covariates of interest cluster. Moreover, the ComBat-adjusted dataset (GSE63412_GSE44229.logcpm.combat.gct) can be used in downstream expression analysis (e.g., differential expression analysis).