Last updated on almost 3 years ago.

This recipe provides one method to identify differentially expressed genes in RNA-seq read data. An example use of this recipe is a case where an investigator may want to compare two phenotypes, such as two types of cancer, to determine which genes are up- or down-regulated differently between these phenotypes. 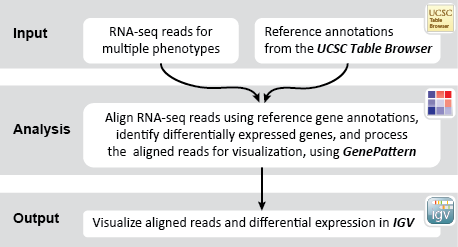 In particular, this recipe uses the UCSC Table Browser to retrieve a reference genome to align RNA-seq reads against. We also used several modules in GenePattern to align the reads against the reference genome, and to identify differentially expressed genes when comparing two conditions. Finally, we use IGV to visualize the differentially expressed genes.

Why differential expression analysis? We assume that most genes are not expressed all the time, but rather are expressed in specific tissues, stages of development, or under certain conditions. Genes which are expressed in one condition, such as cancerous tissue, are said to be differentially expressed when compared to normal conditions. To identify which genes change in response to specific conditions (e.g. cancer), we must filter or process the dataset to remove genes which are not informative.

To complete this recipe, we will need RNA-seq reads, and reference gene annotations to align the reads against. In this example, we are validating a Saccharomyces cerevisiae knockout of the SFP1/YLR403W gene using paired 3’ Digital Gene Expression (DGE) RNA-seq reads. The RNA-seq reads are in FASTQ/FASTA format, and can be gzipped. We will need the following datasets, which can be downloaded from the GenomeSpace Public folder:

1. Click on the file (e.g., WT.fastq.gz) in GenomeSpace, then use the GenePattern context menu and click Launch on File.

2. Click on the file (e.g., WT.fastq.gz) in GenomeSpace, then drag it to the GenePattern icon to launch.

We will use the Cufflinks.cuffdiff module to test differential expression between the two samples (e.g., WT.fastq.gz and SFP1KO.fastq.gz). This module uses the aligned data output from TopHat, and the reference gene annotation GTF file.

Then, we convert the FPKM file to a GCT file using the Fpkm_trackingToGct module in GenePattern.

We will use the Picard.SortSam module to prepare the aligned read data for viewing in IGV. In order to visualize BAM alignment files in IGV, we need a companion index file (BAI) which is located in the same directory. The Picard.SortSam module will sort the file and generate the index. This module uses the *.accepted_hits.bam files.

6: Saving the files to GenomeSpace

Save the genes.gct file, and the sorted BAM files and the BAI files GenomeSpace using one of the following methods.

Repeat this process for the remaining files. In total, you should save the following five files back to your GenomeSpace account:

Optional: when you are finished, close GenePattern.

We will use IGV to visualize the differential expression and abundance levels in the genes.gct file, and check the quality of the mapped alignments from the BAM files. In this recipe, we will also validate that the gene of interest (SFP1) was knocked-out in the SFP1KO mutant strain of S. cerevisiae.

NOTE: For Macintosh Users: JNLP files from the internet are labeled insecure. In order to open the JNLP, find the file in your Finder, right-click the file, and press open. This will open a window that will ask for permission to open the file. Press open to access the JNLP.

Now we can visualize the knock-out gene in our datasets. If you are using the example data, type "YLR403W" into the search box, and click Go or hit enter. Note that there are no reads aligned to the gene in the SFP1KO data and zero expression visible in the sfp1ko_FPKM track. There are reads aligned in the WT sample (although mostly at the 3' end, as expected with 3' DGE data) and a high expression level is visible in the wt_FPKM track.

This is an example interpretation of the results from this recipe. First, we used TopHat in GenePattern to align raw reads from RNA-seq to a reference genome (pre-built in Bowtie). After aligning both a wild-type and mutant strain of S. cerevisiae, we used Cufflinks to determine the genes which were differentially expressed when comparing the two phenotypes. We then use IGV to visualize the difference between these two datasets; in particular, we validate that the SFP1KO mutant strain of S. cerevisiae lacks the SFP1 gene. 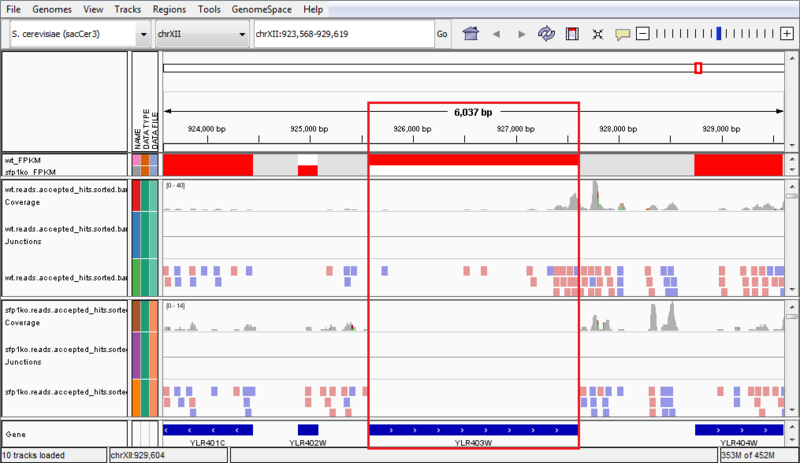 The wt_FPKM track is red in the region of the SFP1 gene, whereas the sfp1ko_FPKM track is white. This is an indicator of gene expression, and shows that the SFP1 gene is not being transcribed in the SFP1KO mutant strain. We can see an additional indicator of this when we compare the wt.reads.accepted_hits.sorted.bam file to the sfp1ko.reads.accepted_hits.sorted.bam file. These are the tracks which have red and blue boxes to indicate where reads aligned against the reference genome. We can see there are several reads aligned in the WT strain to the SFP1 gene, but the area is blank in the SPF1KO mutant, showing that no reads from that gene aligned against the reference genome. These results confirm that the SFP1 gene was knocked-out in the SFP1KO mutant strain of S. cerevisiae. However, the results in this example are not necessarily significant and are only a simple representation of possible results.

Is GenePattern working ok??? I'm trying to use it but I keep getting an error message... "GenePattern Server error preparing job 1314526 for execution.org.genepattern.server.executor.CommandExecutorException: Error adding job to queue, gpJobNo=1314526, DrmaaException=denied: parallel environment "smp" does not exist job rejected: the requested parallel environment "smp" does not exist" Can someone help me???

I forwarded your comment to the GenePattern team at gp-help@broadinstitute.org but they could not find your job on the public server. Could you contact them directly to see if they can help sort this out?